Is has been awhile since my last post….I spent ten peaceful, magical days at Kopan, a Buddhist Monastery above the harsh reality of Kathmandu. The retreat gave me so much insight into the way of life of a Buddhist which I embraced as it resonated so much with my outlook on life. I found myself isolating to give more deep thought and contemplation and it proved to be a very enriching experience. I feel blessed I was in the shadow of the Buddha when I received the news of Wally as I had been studying about life, death and the beautiful impermanence which is the reality we must face to have a life of bliss and not one of suffering. That is not to say I didn’t grieve, just that having to be in a foreign land hearing news such as this…I didn’t feel so alone, and I felt the presence of something much bigger than I and I found some peace.
I spent one day with a small orphanage that I had visited many times and decided to spend some of the money my friends gave. We took first the boys and then the girls on a shopping outing. Most of them, if not all of them had never been to a store to buy things for themselves. At first they were quite shy, then as it is with children, they wanted it all….we bought shoes, ice cream and an item of clothing. They were quite happy.
Another day I traveled by bus out of the city to a Buddhist pilgrimage site where I hiked the hills following in the steps of some young monks, they took me to a mountain covered in prayer flags and then to visit some important sites. It was a lovely day.
I head out today to a smaller city in the mountains. A gateway to the Himalayas. I will be living in an orphanage with twenty or so young boys, and their auntie, and uncle. I brought badminton, soccer and volleyball for them and I plan to play and enjoy the youth of Nepal. I will also be teaching English at the local school and gardening in the local garden……this being said it could easily change as life seems to do…..until I arrive in Charikot…with love to you 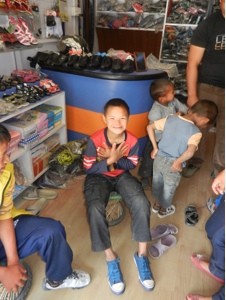 3 thoughts on “And the journey continues”

An Indigenous Perspective from the Rim, River & Road