I awoke early in Curry Village…mmm…actually I didnt sleep well last night..Curry Village is sooo noisy..between the loud neighbors, the gun shots to scare off bears, and my nervous excitement..sleep didnt come easy…I was so happy to see the morning light. I found myself so anxious..almost shaking as I packed my pack over and over..After a big breakfast I boarded the shuttle and took off for the trailhead.
I felt strong from the minute I began the trail. It felt so good
to begin…My permit only allowed me to hike toLittle Yosemite Valley. It is a 4.5 mile hike…but a steep climb..I chose to take the longer route..skirting the falls..but the 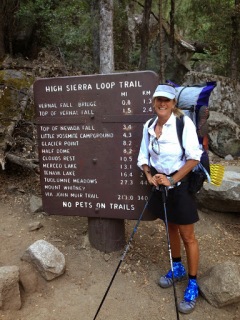 views were phenomenal. My world was expanding and a sense of awe filled my being….
I stopped along the way feeling the blessings that surrounded me.
Little Yosemite Valley came much to quickly. I really wanted to continue on…but I set up camp. I met Andrew, the guy who secured my permit. We camped together and talked strategy for the trail. It was a good start. I heard him moving about at 4:00 am…I rolled over and thought..too cold…Then thoughts of Rumi came to me…”the breeze at dawn has secrets to tell…dont go back to sleep..”I arose…. 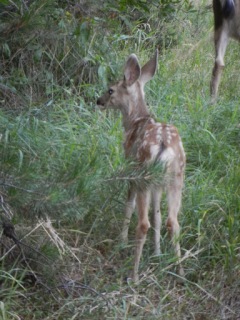 As Andrew strolled out of camp I was finishing my last bites of oatmeal and a delicious cup of coffee. I caught up to Andrew at Sunrise and never saw him again.

It was an awesome first true day on the trail…It set the pace for the rest of my time out in the wilderness…I was strong. Fear never entered my consciousness. With each step my confidence grew.. I intended on hiking about 12 miles…this was never to happen the whole time out…My legs kept walking..I followed..
I met 3 kids along the way..Sara, Patrick and Daniel…they were just waking up…camped close to Half Dome…I would end up camping with them for 3 or 4 nights later on the trail..on I went…the folks on the trail were all so cool..it was fun to stop along the way and meet people..I took lots of photos on this part of the trail…..but they have disappeared …so for now…my words.
The back country is such an amazing teacher. I am constantly filled with gratitude. I feel at one with my surroundings and it is a feeling of complete peace.
Approaching Cathedral Peak..thinking my goodness…..I am cruising this trail…I may make Tuolomne Meadows in one day….I did…Stoked, tired, physically beat..yet filled with yeah!!! I can do this thing…
I was determined once I hit Tuolomne to walk the whole way..a shuttle drove by, cars that would have willingly given me a ride..after 18 miles you would think I would take a ride..nah…I walked another 1 or 2 miles along the road until arriving at the Tuolomne PostOffice to get my re-supply…. Of course I had way too much food…Going through my box I started giving food away to lighten my load…I met a guy..Jake…who I traveled with later…such a cool guy..his brother who was also there had just completed the PCT and was helping Jake get organized to begin his JMT hike…I liked him and was so super stoked to meet up with him later…we became friends a couple days out…
After getting my pack in order I hiked up to the Tuolomne campground, bid Jake goodbye..I met an older man in the campground whom I shared his site….Eventually as the night progressed..our site became invaded by car campers, beer and loud boys talking about their college conquests of girls…I couldnt wait to leave.
Oh..let me regress a moment…I couldnt wait to eat my first hiker meal..meaning…I heard about how hungry hikers got on the trail…granted I had only been out two days..but I was famished..hahahah!!!
I ate a burger, fries and drank 2 IPA’s…ahhhhh life is oh so good!!!!