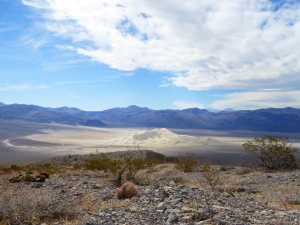 “There is no place to hide in the desert…so we are found.” Terry Tempest Williams
The desert is pure, raw magic. What one sees from the road can not begin to describe the bounty of gifts awaiting within.
The group rendezvoused in Bishop. Whynot?! and I arrived first, followed by Kirby and TAJ….later in the early morning Atlas rolled in. Our excitement was building. TAJ was to be our resident expert. He had been going into the depths of Death Valley for over 15 years.

Our first destination was Eureka Dunes. A bumpy, dirt road was to be traveled for about two hours. An adventure!!! My first siting of the Dunes was a sentiment that I held throughout the journey, which was,from a distance the reality of the destination is so misconceived. The Dunes looked small compared to what I expected. Upon arrival I was in awe. A massive sand dune created by the winds of the valley loomed above us, and as Greta Ehrlich so brilliantly proclaimed, “The wind is a meticulous gardner.” Like children we were gleeful as we arrived at the base. Setting up camp quickly we began the climb upwards to view the rising full moon. We were the sole humans in the vast desert that surrounded us.

What artistry lay before us. Nature is simply amazing in her ability to create what we can only dream about. We climbed, laughing at the difficulty of each step. Walking along the spine of the Dune, carefully as we realized the fragility of it all. Over an hour of climbing one step forward, two steps backward,slipping and sliding, making our way to the crest. We sat. In silence.

Silence is what the desert required. Silence is what my heart needed.
It is hard to fully grasp all that lies before one in the presence of a place such as this, while in conversation. I wanted to be fully present…another sentiment that filled my being throughout the journey.
As the moon rose over the mountains I sat in prayer. How blessed were we. To be there…at that moment in time. The beauty was beyond anything I had ever witnessed..and as Ben Harper proclaims..”I was blessed to be a witness.” But beyond that, not only a witness, I felt a part of it all. The awareness that I wasn’t just a small presence on the face of this planet, but I was a part of the wild nature that surrounded me. That feeling was powerful. I am a part of nature, not separate but an integral part.

As the moon rose we sat for over an hour fully immersed in the display of light on the mountain, on the desert floor and on the dune we sat on. The light filled my senses with joy. We went down, giddy with delight.
The following day we hiked the perimeter of the massive Eureka Dune. It was beautiful. However the postholing brought back memories of when I was injured during a postholing incident coming down Glenn Pass. The skies were big, bold and beautiful. The sun glaring down on our bodies. Our skin already becoming bronzed from the sun. The moon again lit up the sky in a kaleidoscope of color. I go to bed early every night. The others laugh at me, but I find solace in the star studded skies. Trying to move in unison with the breathe of the desert and its shifting sands. 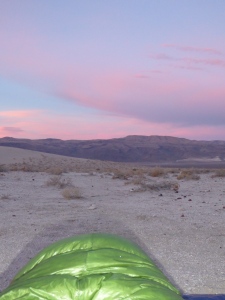 We hiked for two more days in the dunes. Waking , contemplating and group decision making we would pick a mountain, an alluvial fan…and journey on. Not knowing what to expect was exhilarating.The desert never disappointed.
Our last hike in the area was Hidden Dune. We packed up and drove about an hour down an even bumpier road. It was hard to concentrate on walking as the bounty of rocks captured our attention. We wanted to gather every rock and add to our packs. The colors, sizes, and shapes were a spectacular display of wind, water and rain and their effects on geological forms. Hidden Dune was smaller and hidden from the road. It was breathtaking. I discovered two treasures. One a spear point that TAJ said was like something he had never seen before.It was the color of a light jade. Weathered from the deserts energy it lay hidden for who knows how many years. The other was a rabbits foot. The bones and fur were in place, but obviously very old. I carried both with me, wondering why I had found them. I carried the rabbits foot for another 3-4 days. We were hiking up a slot canyon one day and I had decided it belonged back in the earth. I climbed up to an outcropping that surprisingly had a sand base. I dug a hole and I blessed the rabbits foot. A ceremonial circle of rocks around it and a large heart rock I found and its home was made. 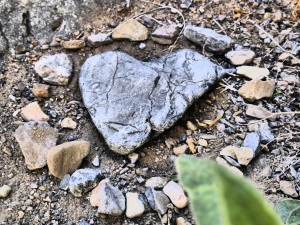 The vastness that surrounded me gave me hope. It made me aware of all the possibilities that lay before me. I felt close to those that have left this life. The desert allows that. I felt so much gratitude to my body for enabling me to do that which I love, surrounding myself in wild nature. I dreamt of those I love. The dreams were vivid and alive. I am alive. Blessed be this journey called life. 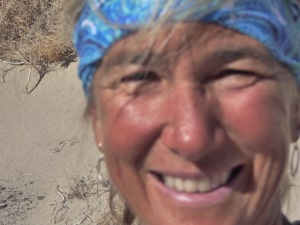 6 thoughts on “the glistening of the moon, the sun, the light and dark on the dunes was captivating”